The forest loves us 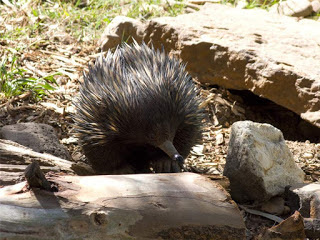 When were you the happiest? I asked, She smiled and said "When we were lost in the forest". I remembered those times too. We would take our lunch and binoculars. We did not have to walk far into the trees before we found a magic land. As we ventured further in the silence surrounded us. Occasional shafts of light ventured through the treetops and the tweets and coos were heard but unseen. As we slowed our pace we could hear the tinkle of a stream and tentatively made our way to obey its beckoning. A small area lit by an opening provided by a fallen tree was where we rested. The wild ones silence was broken by our stillness. It was as though in approval the birds got back to work and flew over the water to catch insects or have a bath. Some chortled with laughter others cooed lazily as we moved not a limb. Suddenly there was a shuffle as an animal ambled through the undergrowth and started digging with its snout close to us to find food. It was an Echidna that looked up at us with his beady eyes, nodded his head and continued his quest for ants. You then said to me "It is so beautiful I feel like singing"

Singing with the stream
Rippling happily along
The forest loves us

I thought that this piece from 2015 deserved another outing

Image found at www.keys.lucidcentral.org
Posted by Old Egg at 04:10