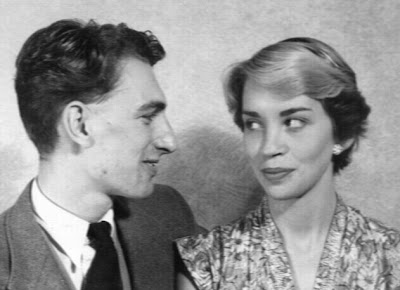 Can I tell you about M? I first saw her, oh so many years ago. Can you imagine me as a young man, well gawky youth really, who knew so little yet because of my age I thought I knew everything?

I worked in this small town in Hampshire, England. In the evening after work I would walk my way along the main street, by the shoe shop, the banks and the bus stops, up the hill past the post office and back home. Barely five minutes walk really as it was a small town!

As I passed the bus stops there would be the small crowd of commuters waiting for their bus to take them home. On this particular evening I noticed a stunning girl waiting for her bus to come in together with the assortment of other travellers. Businessmen, older school children and a fair smattering of wives, mothers and working girls usually carrying bags or baskets of stuff to take home.

My stunning girl was tall, wrapped up in a warm coat, hatless but with a blond streak through her light brown hair. I was mesmerised. Her beautiful face with what I called a ski-jump nose was framed by the turned up collar of her coat to protect against the cold wind. Her stunning green eyes didn’t see me but I drank her in like a vintage wine. I nicknamed her “The Lioness.”

I couldn’t imagine how I could make the first approach. Sometimes fortune favours even the weak for luckily a nurse made a similar trip as the lioness when working nights at a hospital on the same bus route. I asked her if she could mention my interest! I know you may think that may be a bit weak but on the arrival of her bus in the mornings she did indeed look for me and in her turn asked a friend if she knew of this lanky youth.

I plucked up enough courage to approach her in the street as she walked to her place of work and suggested we might go out on a date. This proved to be a little frustrating as I suggested a trad jazz club, and I am sure she would have preferred to go ballroom dancing. A compromise was made and we agreed on the movies. We chose a French thriller “Rififi.” This was a good choice as there was very little dialogue in the film. I did the right thing and presented her with a box of New Berry Fruits and of course paid for the best seats in the cinema.

A little more than a year later we were married, despite grumblings from my family who thought we were too young, and frustration from hers as she already had a steady boyfriend who I was unaware of until later. The amazing thing is that once we met there was no doubt with either of us that we had met our partner for life.

We have been married now for over 50 years and each touch, each kiss and each hug feels the same and are just as precious now as they were back then. That is love.

I want to come clean

I want to come clean

You see that I’ve been

Too long on the scene

If you know what I mean

It started with Kathleen

Who I met at the Green

Must have been sixteen

And didn’t have a bean.

Wow! that was unseen

Aboard that time machine.

Me, I drifted so lean

I was a fiend real mean

From the world’s screen

Please do help me wean

Myself from the unclean

Get out of the ravine

On you I must lean

Aid me, aid me Dean

to break this habit obscene.

Don't mention treatment to me

I always feel sad when I hear the word treatment spoken. It is not a bad word, it's just that significant milestones in my life have been ruined by that word alone. I'll give you an example of just three.

I was at school and struggling with some subjects. English expression might be the way it is described now. For us back then it was "Write an essay" (on whatever subject came into the teacher's mind that week). As a schoolboy I fared well with my peers but in front of class I became a bumbling booby. When I handed in my essay in I had high hopes that I would get a reasonable mark. No luck in that quarter "Old Egg" (he might have said had that been my name at the time), "Your treatment of the subject was abysmal". Much laughter from the rest of the class. Meanwhile I shrank to less than half my normal size.

Then there was the time a group of us teenagers did lots together. Occasionally there would be dates between the couples and so it was I managed a trip to the cinema with Angela. Yes, we held hands and I even managed a peck on the cheek to wind the evening up as it were when I walked her home. Her father met us as I walked her to her front door. He glared at me and after bidding Angela goodnight I looked forward to getting to know her better. No luck in that quarter either. From that moment on I appeared to be of an alien species to Angela. The other blokes commented on this saying, "So you got the treatment too did you?"

And so it goes. Health is the final point. From childhood treat has always meant something pleasant, a surprise, an outing, a visit or any number of joyful experiences. Why should an encouraging word like "Treatment" have to mean being subjected to an assortment of indignities just to get you well again. Most of us will have experienced this in one form or another and I have no intention of showing you mine in case you show me yours! I was hoping to find that treatment was an anagram for something dire. There are in fact very few such words in Treatment. Mean is one, rent and tear are others, but the prize word I found to show what treatment was really all about was enema!
Posted by Old Egg at 00:58 8 comments: 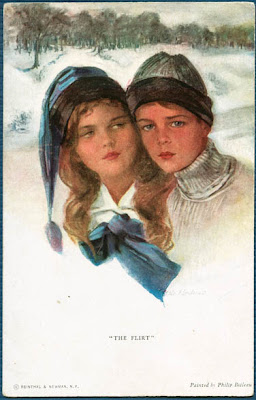 I waited long my lovely
On that summer's night
All neat and smart and longing
For your presence to light
My fire, my passion
And promise you my life.

I waited long my princess
As the air turned chill
My plans went all asunder
And much against my will
wept some tears of doubt
that you would be my wife.

Postcard "The Flirt" by Boileau in writer's possesion
Posted by Old Egg at 23:53 8 comments: