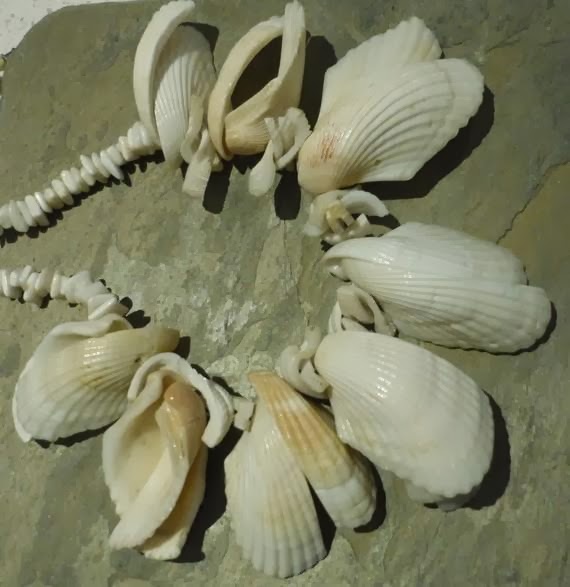 Everything quietened down in the cave after Yum’s fight with the woman in the fish trap. The woman’s husband would have been cross with Dum had it not been the fact that Grunt and Dum did everything together and he was no match for them. He also knew that his woman was greedy. When he learned that Yum had given her the fish she had taken and merely told her she couldn’t go there anymore he didn’t see a problem. They would manage by themselves somehow.

Yum and Dong continued to go to the beach each day and collected shellfish when there were few fish in the pond. The fish tasted good when put on the fire but the shell fish were better eaten raw. Soon there was a pile of shells outside the cave and Yum had an idea of what to do with them. The ones with the best colours and similar size she collected from the pile and found that if she was careful she could make a hole in the thick part to thread some twine through them and fasten them all together. When she had a number on the string she held them up and looked at the pretty shapes. She then fastened it around her neck and leaned over a rock pool to see what it looked like. She loved it so she made another one and when Dong wandered back up the beach to join her she gave it to her.

Dong wasn’t sure. “Doesn’t Dum like how you look now?” she asked.

Yum laughed “Dum would like me even if I had a smelly fish hanging round my neck. No, this is to please me. Now let me put yours on you too Dong.”

Dong tried unsuccessfully to look at it on herself so Yum pointed to the pool and showed her how to see herself in the water.

Dong looked at herself and saw the necklet and how it emphasized her face and even made her tangled hair look good.

“It is good Yum. It will show that we are friends. You teach me different ways of doing things and now I am even beautiful like you. I like it.”

Image by Torispelling.com
Posted by Old Egg at 23:07