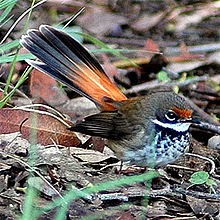 Houhia’s time for her baby to be born was very near. However she still told the children stories when she could. One day a little boy asked “Whatever happened to , Hekeheke?”

She put her finger to her lips to stop all the children chattering and then said “I will tell you but it is a sad story”. She then beckoned one of the smaller children from the back to come forward and let her sit down by her and put her left arm round her.

“'s final task was to try to win immortality for mankind. Hadn’t he managed to tamed the sun by catching in a net to slow it down so man would have more time to work during the day? Surely he could also tame mankind’s permanent night of death?
So he planned an expedition to set off far to the west where there was permanent darkness. He would go to where Hinenui-te-Po, the goddess of death, lay asleep. Somehow he reasoned that he had to enter into her and make her sick and upset her so much that by the time he emerged again from her mouth the goddess would never again have the power to take life away from mankind.
To fulfill this feat was going to enter her womb disguised as a caterpillar crawl up through her body and emerge from her mouth. If he could do this death would never have dominion over humans. As usual on his travels a little bird accompanied him and this time it was a little tiwakawaka or fantail. The bird was there just in case Hineniui-te.Po woke up and saw the bird with a caterpillar close by she would think nothing of it.
Maui discussed the plans for this most daring feat with the bird and when the birds nodded as they do took the magic Jawbone that gave him power to change himself and turned himself into the caterpillar. However the sight of Maui as a caterpillar inching his way over Hine's thigh as she lay sleeping was altogether too much for the little fantail who could not restrain a chirrup of delight and started chasing after him. With a start Hine awoke, realised the plan and crushed the helpless between her thighs.

So Maui-tikitiki-a-Taranga died and so death is with us even today. Children, you must live your lives in such a way that when the people of the village say your name, they and your children and your grandchildren remember you with honour.”

The children had not heard the story before. Some were very upset.
“You are leaving us, aren’t you Hekeheke”, said one older girl.
The little girl she was holding turned around to her and hugged her tight.
Hekeheke then said “You all know I am going to have a baby. I am sure that when Mahuika comes to see Ahuahu and his family she will tell you a story when she is here. Then when I have had the baby and feel am ready to tell you more stories again I will let you all know.”

That night as she was cooking a meal for her husband and herself she started to sing a Maori love song:

As she was singing came home and hearing her, joined in:

Laughing Hekeheke put aside the cooking and came out to greet him, rubbed noses and said, “You are bad; you know those last words were wrong. You should sing ‘’ (meaning My darling).”

Maui merely went with her inside and then held her, patted her bottom and breathed in the scent of her hair.

The next day Hekeheke went into labor and delivered a baby boy down at the traditional women’s birthing place in the woods. Less and less women were doing that now. Even Houhia had delivered her baby at home with Ahu and Hatiti to help her. However Hekeheke wanted to cling on to the past as long as possible. How could she be a real storyteller unless she had experienced the traditional ways of her people?


“To you my Darling” is a modern Maori love song written by Prince Tui Teka (assisted by Ngoi Pewhairangi), who wrote the song about his wife Missy. You can find the song on http://folksong.org.nz/e_ipo/
Posted by Old Egg at 02:09