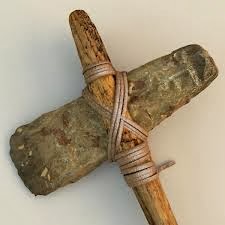 Dum and Grunt told their wives about the fish trap and said as they had made it they should collect the fish when the tide went out and to tell the other women they could take some too. It took some time for the other women to understand as they would go there when the tide was out and it would be empty. When they saw Yum and Dong carrying back fish each day they got in the habit of following them down to the beach for their share.

Meanwhile Dum and Grunt knowing that the women could find fish on the beach most days would wander off together to explore much further inland where the forest was and the mountains were covered with clouds. Yum was glad he did this as she liked to have some time just with Dong to exchange complaints about their men and have a good laugh.

One day the men had followed the river upstream to see what they could find and it wasn’t long before they came to a forest of trees where it was cool and dark inside. Grunt carried only his wooden spear. Dum had one too but also had one of his bags on his back to put any finds in. They hoped they could find some small animals in the forest.

The terrain got very rugged and apart from the sound of rushing water all birdsong and animal cries had ceased. They cautiously pushed their way through the trees and bushes following the stream where they could. Although his sight was impaired, Dum’s hearing was acute and every now and then he would stop and cover his mouth to indicate to Grunt to keep quiet. Grunt was a bit too noisy for Dum and he felt like hitting him but thought better of that idea.

Suddenly he heard a strange noise. It was the sound of stone hitting stone. Once again he hushed Grunt and indicated that there may be another person in the forest. Grunt strained his ears but shook his head. Dum listened again then pointed to where he thought the sound came from.

Once again indicating they should be quiet he led the way carefully towards the sound. As it got stronger he walked slower and more carefully. Until he turned to Grunt and pointed to himself then in front of him to say there was another person in the forest.

Then they saw him. The man was crouched in a clearing by the stream chipping at stones he had pulled out from the water. Dum and Grunt stared in amazement as the stones he was shaping were laid out on the ground and by their side were some stout sticks that he was trying fix them to with vine stripping. He tried to wedge the stone onto the stick and tie it on with some stripped vine. Eventually he made one hold fast and tried it out by lifting it up and striking against a fallen branch. Where he had chipped the stone sharp on the edge it cut into the wood splitting it. But this did not satisfy him as the cutting stone was now clearly loose on the handle. He threw it down with frustration and gave up, taking a few of the stones he had shaped with him and walking away.

They waited a few minutes then went to see what he had been doing. Dum collected up some of the half made stones and gathered a few more of the hard pebbles from the stream and put them in the bag on his back. He nodded to Grunt as if to say they could go on now. So they continued to look for animals to catch. Further on they sat by the stream again and by the footprints, animals drank there but none came while they watched.

Dum meanwhile wanted to get back home again as he knew where the man had gone wrong. The sharp edged stone should be inserted into the piece of wood after it had been softened by some water. Then it could be tied in with vine strands. He knew he could make a tool and a weapon.
Posted by Old Egg at 21:48