Dum and Grunt's encounter in the forest (Dum tales 14) 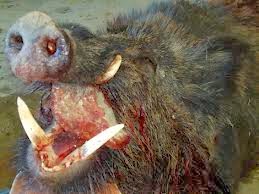 It had been a long winter but with the families in the cave huddled together and Dum and Grunt’s hunting animals and the women gathering fish and shellfish they survived.

Grunt did not like Dum’s axe, he preferred his spear the end of which was a sharpened to a point. It had to be sharpened almost every day as even missed throws dulled its point. They both knew the spear was very effective but the axe was more useful for other jobs.

In the end Grunt asked Dum for some flint chips that might be fixed to the end of his spear so that it would not have to be resharpened. Dum looked through his collection but none seemed suitable so once again they returned to the forest to search for the hard flint to work on.

In winter the forest without leaves was less dark and the stream ran fuller and the sound of their movements echoed louder than in the balmy days of summer when even the insects seem to shout out at them muffling their passing.

They were still some way from where the flint was when all of a sudden there was a rustle and a snort of heavy breathing in the bushes and a wild pig all dark and bristly emerged from the bushes and rushed at them. Grunt threw his spear which just deflected from its back but Dum just stood his ground as the animal advanced intent on goring him. When it looked too late to escape Dum raised his axe and brought it down on the pig’s head and fell sideways to avoid the animal crashing into him.

Grunt watched in amazement as the pig continued on and then collapsed a little distant further away. Grunt then retrieved his spear and rushed after the pig and finished it off as it threshed its limbs about trying to get to its feet.

It was a boar and although not fat would feed the cave people for a few days. As they examined it Dum pointed to the tusks and indicated they could make good points to their spears as two were straighter than normal but the others were curved. He then pointed to one straight one for Grunt and one for himself then one curved one to give to Yum and one for Dong.


Grunt hadn’t seen that far ahead but Dum knew that by taking something back for the women to use or wear would make life very good for the men. Grunt still thought that he should have two tusks and if the Dong wanted the other teeth she could have them. Dum merely indicated they would share everything and looked to the side so his missing eye faced Grunt while he worked out how to take the animal home. This was his way of saying he was disappointed Grunt didn’t want to please his woman.

Dum knew how much better life was then especially with Spring coming when women’s moods seem to change after the privations of winter and Yum would wash herself again and he might too.
Posted by Old Egg at 22:23