Mahuika's Tales No 29 The Battle of the Birds 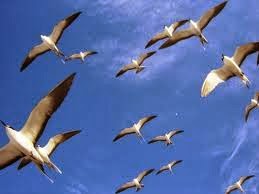 The seabirds on their way


Hekeheke and Maui called their baby Tamahika after her late father whom she loved very much. This name is associated with Rotorua where the hot springs and geysers are. It was her way of showing where her family came from. No one was surprised at Black Sands because she was regarded  as one of them now as the village children all loved hearing her tell the stories and the fact that she had been adopted by Ahuahu, the chief's family as she was a friend of Mahuika. Hekeheke had not yet returned to story telling but Mahuika came often to the village to stay a few days to see Ahuahu and his family and especially to see Hekeheke who she loved as a daughter.

When she came there were family gatherings at Ahu and Ahuahu’s home with the whole family sharing a meal and afterwards telling stories.

Mahuika was always called on to tell a story and sometimes one of the other members of the family would tell one too. This night as Hekeheke nursed Tamahika in her arms Mahuika told the story of the battle of the birds. Hekeheke leaned against against with Tamahika in her arms sucking contentedly as Mahuika began her story.

“A long time ago the birds of the air did not have designated areas to live. They lived where they chose and it so happened that some Kawau (cormorants) lived by the sea and found their food there and some lived on the lakes and rivers inland and fished there.

One day the salt water kawau was blown inland and found a lake that was inhabited by a fresh water Kawau. Being polite he did not fish in his lake but waited to be told he could feed there. But the invitation never came so he suggested instead that the other Kawau fly back to the sea with him and fish with him there. So the inland Kawau agreed and followed him out over the land to the sea. Immediately the sea bird dived into the sea and found a fish and offered it to the inland Kawau who swallowed it down but almost choked as it was so spiny on its back and with its fins that stood out that he regurgitated it. “Your food it terrible, it is so much better where I live.”

“What food do you eat there?” asked the sea Kawau.

“Matamoe (eels)” he replied, “They are smooth skinned and easy to swallow. Let’s go back to my place to eat instead.”

So the two Kawau flew back to the lake and when the sea Kawau tasted the Matamoe he said “This is excellent cousin. Wouldn’t it be a good idea if we both were able to fish in each other’s waters. You can have half of my territory and I can have half of yours.”

“In that case", said the sea Kawau crossly, “Before long my family and friends will take this place from you for not sharing it.”

So the sea birds and the land birds prepared to fight each other. The land Kawau managed to get the support of the Kuku (pigeon), Kaka (parrot), Tui (parson bird), as well as the Ruru (owl), Piwakawaka (fantail) and the Pitoitoi (robin) and many more.

When they were all gathered night began to fall and the Pitoitoi said that he would wake everyone first thing in the morning to prevent a surprise attack, then the Koekoe (Cuckoo) said then I will go and if I see them coming and will call Koe-ko-o-o-e so you know that they are approaching.

At dawn Pitotoi (Robin) woke up all the land birds. Kawau (inland cormorant) went on watch from a tall tree. Then he thought he could see movement of the horizon and sure enough all the birds could hear Koekoe the cuckoo calling out Ko-ko-o-o-e from a distance. Karoro (Seagull) who was in the lead of the invading party called out "Aha, aha" as they do when he heard the Cuckoo who by then started to fly back to be with all the other land birds.

"Who will advance and challenge the enemy?" asked the land Kawau, and the Pirakaraka (fantail) said "I will" so he went and stood awaiting the advancing army flicking his tail from side to side glaring at them and taunting them with his dance. "Tei, tei, tei," he called to them and them flew back to his friends.

"Who will speak the ritual of war to us," asked the land Karau. So Tui (parson bird) said "I will, but first let the Honge (crow) give the warning but first let Tane-te-waiora herald the sun's rising so it might shine on us. Pipwharauroa (cuckoo) can then conclude the ritual and Kuku (pigeon) make the final response. Thus all the necessary actions were taken. Ruru the owl then led them all into battle with the birds from the sea. He lifted his wooden powhenua (spear) and with his eyes blazing at the sea birds as they advanced called out mockingly, "Come on brave and gallant birds from the sea" and hooted at them. With this the Parera (duck) laughed too and went "Ke-ke-ke, ke-ker". With this jeering and laughing the Kaka (parrot) flew in, glared at the enemy flew up above them with a stone in this claws screeching "Look out, look out, haven't we warned you enough? You don't belong here," and dropped his stone on them. So the battle began but the sea birds had been humiliated by the way even the most unlikely of the land birds had laughed at them as they protected their home especially the Parera (duck) as he kept repeating "Ke-ke-ke-ker (quack-quack-quack-quacking) all the time so in the end they turned and flew away.

They returned to the sea and vowed never to return over the land again except to make their nests on the seashore nearby or islands in the ocean and have stayed there ever since."

The story really pleased the children and even Tiemi the white man who had married Houhia clapped. Mahuika then spoke to the children and said "Remember, each of us has special talents that may seem quite small but when all are used together just as the land birds did can defeat the most menacing enemy."

Then to everyone's surprise Tiemi asked if he could tell a story. Ahuahu nodded saying"Will you tell it in Pakeha talk or Maori?"

"With Houhia by my side I will tell the story in your language and she can correct me if I go wrong. Mahuika's story reminded me of a very old story from a civilisation now long gone about a mouse (kiore) from the country and one from the town, like Auckland." Here Tiemi pointed to the north where the big pakeha port town was.

"A proud and sleek town mouse (kiore) visited his poor scruffy cousin in the country. The country mouse offers the town mouse a meal of simple country fare, some fallen grain he found, and a drink from a puddle outside. His visitor scoffs at this and invites the country mouse back to the city to see how well he lives. Sure enough when in the town mouse's home the two eat like chiefs with bits of cheese, milk to drink and even pieces of fruit and they even nibbled on some cake. However their feast is interrupted by some snuffling and barking at the door and suddenly a dog (kuri) bursts into the room, sees them and chases after them so they have to hide in a hole in the wall. When the dog finally gives up and a goes away the country mouse decides to go home to the country saying "I am sorry cousin, I prefer to eat the fallen seeds and drink rainwater rather to have my head bitten off."

As Tiemi finished Houhia clapped her hands and said, "See, I didn't have to translate a word! And look my town mouse Tiemi, has come to live in the country."