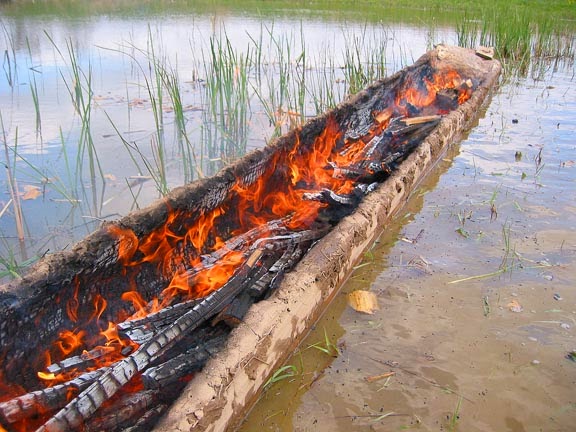 Burning out a log to use as a canoe

For the second special and 100 th Anniversary I have chosen prompt words not used before during a hiatus in my posting to Josie’s site and have brought back Dum and Yum the prehistoric cave people. Dum was the thinker and inventor that humanity had to have in order to progress. In this special chapter we see him take advantage of a catastrophe that hit the habitat they lived in. To see early stories about Dum and Yum just click on Cavemen in the Labels bar. I have made use of the prompt words Easy, Wind and Cloud

All of the cave dwellers had moved to the village where Song the spirit woman lived. She had persuaded the head men there that Dum would be a useful member of the village as he had good ideas on hunting and inventing new tools to help them in everyday life.

Some of the cave people had not been sure but when they found that each family would have a hut made out of branches and with a watertight roof covered with twigs and leaves and even moss that kept the rain out they slowly got accustomed to it especially as the bigger community felt safer together and were to repel raiders whether they be outsiders or hungry animals like bears and wolves.

Dum as usual made the most of this security by spending much time travelling further afield to see what was there knowing that his family would be safe in the village if he was delayed.

So it was that one cloudy and windy day he and Grunt his friend from the cave days travelled north they were caught in terrific storm and had to shelter overnight in most uncomfortable conditions in the forest. They were soaking wet they couldn’t light a fire and the storm’s wind had been so great many trees were blown over and even swept away in the flood of water from the hills inland that swelled the rivers and burst their banks.

Grunt was miserable and wanted to get home quickly to his woman Dong but Dum was curious. He wanted to see where all the debris of the storm had been washed to. He also was dubious about crossing the swollen river that ran so fast he could imagine them being swept away, injured or even drowned.

He finally managed to dissuade Grunt from crossing the river that was in turmoil and white with foam and seemed very angry indeed. So he promised Dong they would cross when it looked easier.

Dum kept lifting his nose to the breeze to catch the scent of the ocean. Finally he indicated to Grunt that soon they would see the sea. Now the terrain was flatter the river started to run slower and the debris was being washed up on the banks in great heaps. Finally they reached the shore and the beach was covered with all manner of detritus. Little rivulets spread over the flat sand and with piles like little islands on the sand they scrambled from one to the other to get the village on the other side of the river.  However their way was blocked and as Dum could see a lot of debris floating in the sea he indicated to Grunt they should wade out in the water and hold onto some large branches and somehow find their way south back to the village by water. When they finally found the beach clear again they would walk again. Grunt was very unhappy he didn't like the sea but as he too wanted to get home he reluctantly agreed. As there was so much debris they soon saw a large branch and waded out to that held on and finally straddled it while Dum paddled with his hands to get clear of other obstructions. It was not long before they were clear of most of the obstructions and made their way back to the village side of the blocked and swollen river. As they got nearer the shore Dum slipped off the branch to see if his feet touched the sandy bottom. He had to do this two or three times before he felt it so he then dragged the branch in shore with Grunt still grumbling as a passenger.


Slowly they made their way back home empty handed but safe. Yum welcomed Dum back with a hug and he told her what had happened. Then she showed him the damage that had been caused to the village with several huts losing their roofs. However everyone was safe. Once they got a fire going again and had eaten some food Yum saw that Dum was thinking hard. Later he told what they had done and said they he was going to make a log useful to travel out to sea so they could catch fish further out from the shore. Yum just smiled at him. How she loved him for even in danger he could see the possibilities of improving their lives. 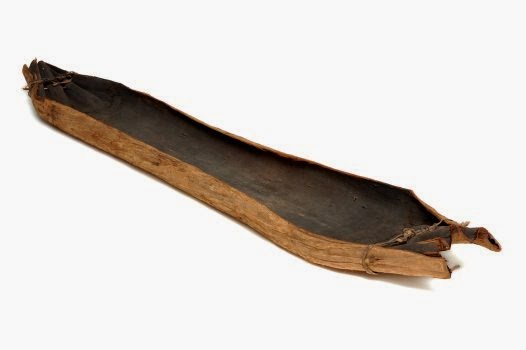 Dum's later invention of a bark canoe
Posted by Old Egg at 16:10