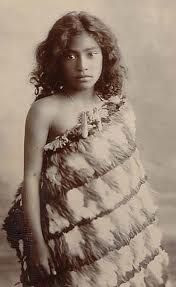 Ahuahu had caught barely enough fish for himself let alone wife Ahu too. When would their baby be born? As he thought about Ahu waves splashed the rock and drenched him. He shook the water off and heard laughter.

“What are you doing here Moana?”

“Mummy told me to fetch you, Ahu is back home now.”

Ahuahu’s felt relieved and flicked the water off,  pulled in his line, packed the two fish  to return home. He quickly strode off forgetting Moana running after him. Hearing her call out “Ah-ua-hu " sounding lile the wind blowing through trees. He stopped for her, placed her tiny hand in his as she whispered, “She is nursing baby and is waiting for you".

When they approached the village, Moana broke free and rushed ahead and shouted “Ahuahu is back.” Hi’ilei came up to him and punched him on the arm with a broad grin, but did not walk with him.

Ahuahu entered his whare,  two village women nodded and left. It was dark inside; his eyes adjusting to the light saw Ahu kneeling, wrapping the baby up to put it in her pouch to carry it.
“Ahu, did it all go well?”
She looked him straight in the eyes “Ahuahu my husband, you have a son.” She then lowered her eyes in the way that he loved and his heart radiated such emotion that he bent down and held her face in his hands and rubbed noses with her and he cried tears of joy.
Ahu held him close as she whispered  “You are a great man Ahuahu, as you are not immune from showing your feelings. Now I have two little boys to look after but now's time for you to brag to the men about what a fine fisherman he will be.”

“I was drenched by a wave while fishing” Ahuahu said, wiping his eyes

“Everyone knows” She said, “Moana told the whole village”.

This brief extract from a serial about Maori people before the colonisation of New Zealand nearly two hundred years ago which I started writing about over nine years ago. Word count 322

Illustration of 'Moana' found at https://www.pinterest.com.au/robkim36/maori-early-photos/