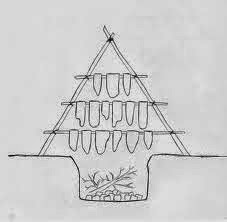 For some time Dum had been pondering the problem of regular supplies of food so that they could stay in the cave all the time and not have to wander too far from safety to catch animals in the forest or fish for other creatures in the sea to eat. The problem was that land animals were not plentiful but had to be searched for and often you were competing with other tribes of people or worse still larger animals that considered you edible too.

Each animal seemed to have their season to be plentiful then wouldn’t be seen again for months and the cave dwellers would get thin again. No far from their cave down a short trail through the trees was a smaller cavern that they stored the carcasses of the animals until they went rotten and started to crawl with maggots or worse still were stolen by other predators.

Yum could tolerate smelly meat and didn’t mind so much as she would eat anything but with only one eye Dum’s other senses were enhanced and he would shake his head and moan “Bad” if he thought it was too much to stomach even when nearly burnt black by the fire.

One day when the smell in the storage cave was really bad they set fire to some branches of wood still green to make it smell better and detract animals. They then put in their fresh meat from the recent kills back in the cave even though it was still smoky in there. They placed the carcasses and other meat up off the floor on timber racks to stop the insects and small animals finding it.

Later when some women went in to fetch some meat to eat they found the cavern filled with smoke that had wafted into the cave. This caused the meat on the racks to dry out and change colour. The women were cross that the meat had been spoiled by the smoke and didn’t use it.  They told Yum who in turn told Dum who went to have a look. The fire was still burning weakly in the enclosed space and it was difficult to see inside.

Eventually Dum went into the cave and found that some of the meat had changed colour but didn’t smell bad at all. Even though it was still quite hot he managed to put some in one of his baskets for Yum to see. They found that although the meat had changed colour it did not smell bad and when they tasted it was good to eat. When cooked it tasted even better.

Dum thought about this a lot and nudging Yum one night and grunted to her “Shall we try to smoke fish dry too?”  Yum laughed and shook her head but pulled him closer to her. Dum was silent for as bit then said “I think I have another idea”.

Yum then said “Are you thinking of drying fish or pleasing me?”


“Both” said Dum, who then pictured what he thought they should do.

Image from buttonsoup.ca
Posted by Old Egg at 22:46