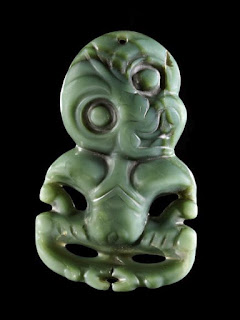 The continuing story of Ahu and Ahuahu her husband in a Maori village in Aotearoa before European settlement of New Zealand. (Missed an episode? Click on Ahu in the labels bar for previous posts.)

Despite Ahuahu‘s fear and that of the village council, there was no threat to their village from other villages who may have been trading with pakeha and nothing was heard from the Big River settlement. The wide and deep estuary was clearly known to the pakeha which is why they had had made landfall there years before. The flat alluvial plains each side of the river were good for tilling and the information from Hinewai indicated that this would be a good place for them to establish a settlement.

Over the ensuing year their village had the occasional visitor from Rocky Outcrop and who was clearly instructed to find out more about Black Sands and if it could be defended. This pleased Ahuahu seeing that as a sign that the Rocky Outcrop chief had acknowledged the wisdom of Hinewai's advice regarding the musket.

Moana and Paikea had settled down in their married life together but no babies would come. She visited Ahu and Hatiti occasionally and would talk of many things but never mentioned that babies would not come. Eventually Hatiti could not resist asking about this.

“Is Paikea’s mother chiding you for not being with child Moana? My first husband Kaihutu’s mother would talk of nothing else from the day after our wedding,” she laughed.

Moana cast her eyes down as Hatiti started combing her hair. “No, she says nothing. If she says anything to Paikea he does not tell me.”

Ahu, who was still attending to the little ones, then spoke. “Do not hold in your worries Moana.” She looked around to see if any of the older children were close by. “Talk to us. It may help.”

“I do not know what to say. “ Moana’s eyes were full of tears, “We make love…often, but a baby will not come.” The two older women then attempted to soothe her.

“I was born first,” said Ahu, “but a second baby would not come so my father treated me as though I was boy as he was so disappointed I was not one. My mother was given a Hei tiki necklet to help her conceive again. But by then her love for him had died  so she did not wear it. It is the only thing I have left of hers. I have kept it but have never worn it.” She then smiled at them. “That is because babies come easily to me.”

“You have never shown me it, Ahu” said Hatiti.

“Do you think it will work, Hatiti?” said Moana as Hatiti continued to comb her hair.

“Babies will come when they are wanted but you must imagine them all swimming together in a conch shell but only one of them is right for you. You must empty the conch shell and do not leave any behind. When you make love again do not let him rest until he is fully emptied and cries out, no more.” Hatiti smiled at Moana. ” But still do not let him go. But hold him tight all night. Then make him take you again when you wake...” Here Hatiti paused as Ahu returned to them, and continued, “but wear the tiki at all times too.” She said grinning.

Ahu returned and presented the Hei tiki to Moana. She looked at it delighted and exclaimed “It looks like a little baby!” Ahu nodded in agreement but then said to Moana. “Is Paikea happy?”

“Yes, he is happy with me but he feels that as he is a man now and should be given more responsibility.” She paused here and bowed her head. “His father talks to me a lot of village matters but does not seek Paikea’s advice. I speak freely and honestly, but when his father has gone Paikea will ask ‘Why did he not speak of that with me?’”

“Moana,” said Ahu, “We told you a long time ago that his father valued your opinion and thought that this would help Paikea to become wise too. Being the son of a head man does not mean he is automatically wise.”

“It may be necessary to tell the head man of this,” said Hatiti.

Ahu shook her head, “I agree that he should know but to talk directly with the head man about his son, your husband, is not wise. Paikea will see this as a betrayal.”

“Yes, she will like that,” nodded Ahu “This will not be a betrayal, but a talk in confidence between women. His mother will tell her husband the Head man in her own way and she will value your friendship and confidence when you speak this way to her.”

A few months later Moana told Ahu and Hatiti she was pregnant. As she had not seen one of Paikea’s married sisters it was arranged that they would both go to his sister’s village which was known as Agate Hills far south beyond Big River well before the baby was born.