The Laundry Girls and the hinge of fate. 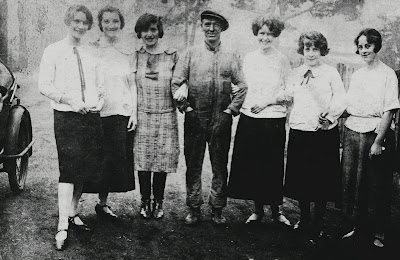 Look what I came across, it’s an old snap of the Laundry girls, and there is the foreman, five laundresses and the office girl. It is 1926 and it must be summer in England. For working girls the bobbed hairstyle was all the rage, even in a city on the south coast of England. Well they knew all about the latest styles because fathers and uncles worked the big liners that sailed into and out of Southampton all across the world. They would tell their daughters and nieces all about what they had seen and describe the exotic places they visited how the ladies dressed in America. So the tales from far off would germinate a need that would echo the black and white pictures they saw in the movies with the subtitles imposed and a piano player providing the music to match the scenes portrayed.  The hinge of fate has yet opened on their lives.
That is Edna on the left and she has put her best foot forward. Curiously she was quite shy, and soon she will get engaged and later will give him up because he was too “fast”. Later she will marry the son of a friend because everyone will say what a hard worker he is. But that doesn’t make them love each other, and she will feel she has failed him because she can only bear him daughters and not sons. Edna lives to be 97.
Next to her is Patsy, what a pretty round face and smile Patsy had. Sadly she believed everything her first boyfriend told her and ended up pregnant a year after the photo was taken. Her mother raised the baby girl and Patsy thought of the little mite as a younger sister. Patsy died during a raid on the docks in Southampton in 1941 and her baby never ever knew who her real mother was.
Deirdre the office girl could type, so she worked in the office. She was the clever one and was good at dressmaking. Her indulgence was shoes because her mother used to tell of not having shoes to wear to school and having to wear her brother’s boots. So Deirdre decided to be different had four pairs of shoes including the black leather boots she is wearing here today!
This is Bert the foreman with the two most senior girls linking arms with him. He was a veteran of the 1st World War but was too old for new war in 1939 forecast to be more lethal than the first; and it was for many. Bert joined the Home Guard and guarded the Post Office at night with a broomstick as there were not enough weapons to go round. He died in 1948 of tuberculosis after spending months in a sanatorium just south of Winchester.
Brenda is next in line with the big hair, I think she is a beautiful girl and she is in charge of all the girls except Deidre. Everyone loved Brenda. She married Frank a butcher’s boy who delivered meat on his bicycle and eventually had his own butcher’s shop. They had five children two boys and three girls. Their eldest boy became a politician and stood for parliament a couple of times but always got beaten by the sitting member.
Winifred comes next and she always looks sad. She is the eldest of eight and her father died many years ago. At home everything is left to Winifred to do, and must go out to work, get the younger children ready for school and somehow run the home while her mother takes in sewing. She said that when she married she would never have children but when one of her younger sisters had a child she changed her mind and never regretted it. She loved all babies and when she was old and ill her daughter looked after her.
Now what can I say about Lucy? Lucy was trouble with a capital T. When waists were not emphasized she bucked the trend and showed everyone she had one! With her dark come hither eyes and olive complexion some say she had Italian blood in her. Who knows? She didn’t stay long at the laundry for people to find out. The story is she headed straight for London and hit the stage with a bang. I like to think that when most of the theatres were closed down during the war she stayed on to entertain Londoners with some feathers and exotic dancing at the Windmill Theatre!


Note this is a conjectural piece with names and events invented